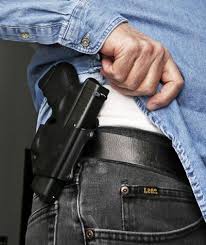 That’s what OGO member Matt just told me on the phone when he called our office to ask some particulars about Constitutional Carry. You see, Representatives Tom Brinkman and Ron Hood are introducing Ohio’s Constitutional Carry bill, and right now it is open for cosponsors. But the deadline for cosponsorship ends tomorrow at 5:00pm sharp! I explained to Matt that there were a lot of newly-minted State Representatives who promised

Constitutional Carry just passed through the South Dakota Senate TODAY. It now heads to the South Dakota House, where my personal friend, Speaker of the House Steve Haugaard, will likely ram it through in a matter of days! And after newly minted Governor Kristi Noem signs it into law (as she said she will) into law, South Dakota residents will no longer need permission to exercise their Second Amendment rights

The Second Amendment IS my firearms permit.” I’m sure you’ve heard that phrase before. If you’re like some gun owners I know (myself included), perhaps you even have a t-shirt proudly declaring it so. That’s what the Founders intended when they enshrined our Second Amendment in the Bill of Rights – to limit government’s power to restrict the People’s ability to protect against government tyranny and ensure that America would

Last General Assembly, gun owners got the short end of the stick. As you know, HB228, which was a watered-down bill in the first place, was GUTTED in the Ohio Senate Government Oversight Committee. That means Ohio gun owners like you and me still have a “duty to retreat” from violent attack. We still don’t have the ability to “threaten” to use force to deescalate violent situations. We still don’t

Yesterday, Speaker of the House Nancy Pelosi declared open war on the Second Amendment by introducing H.R. 8 — National Gun Owner Registration. Having been funded to the tune of well over $100 million from billionaire, anti-gun NYC Mayor Michael Bloomberg, her #1 priority is to pass a national registry of gun owners under the guise of universal background checks! Universal background checks will make FELONS out of gun owners

Moments after the U.S. Senate gaveled in on Thursday, Florida Republican Senator Little Marco Rubio introduced Senate Bill 7 — ‘Red Flag Gun Confiscations.’ This is the fight I’ve warned about for months, and now it’s finally here. In a nutshell, Red Flags would allow for government confiscation of your firearms without due process. If someone you know simply calls you in and says you’re “crazy”, under Red Flag law,

On behalf of the board of directors of Ohio Gun Owners, I want to wish you and your family a very Merry Christmas! We mention family often in our emails and direct mail updates to our members and supporters because, after all, that’s the whole point of Ohio Gun Owners -– preserving and defending the Second Amendment for the next generation! Our forefathers fought and died to make sure that

I got back moments ago from the Ohio Statehouse in Columbus from this morning’s Senate Oversight Committee third hearing on Sub-HB228. This email is extremely important, and we’re asking to read it quickly and immediately take a few minutes to make TWO quick phone calls. More on that in a moment. First, this morning’s committee hearing on Sub-HB228 went well. I offered testimony on behalf of the thousands of our

HB228 is scheduled for it’s THIRD hearing this morning in the Senate Oversight Committee at 9:30am! Your immediate action is needed to amend it into a SOLID Stand-Your-Ground law! As you know, we’ve been working hard to FIX HB228 into a full-orbed Stand-Your-Ground law. So many of you have been contacting the members of the Oversight Committee, and we can’t thank you enough. But today we’re asking you to do it again — we