Two hundred and sixty-five days stand between now and Governor Kasich’s exit from our governor’s Mansion, but he’s hell-bent to use every one of them against gun owners.

In a Lincoln room press conference at the Statehouse, Kasich signed an Executive Order (EO) to expand the amount of data flowing from Ohio into the Federal gun-owner database. 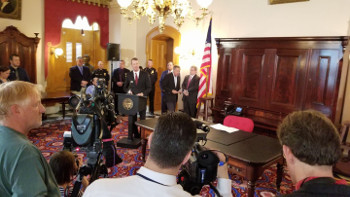 In fact, it is a deliberate, calculated move that accomplishes two things for Kasich.

First, it furthers his 2020 plot to unseat President Trump through a primary or independent candidate challenge.

But second, and most important for gun owners, expanding the size and scope of the Federal gun owner database is a critical step towards gun-control by declaration rather than adjudication.

Let me be clear: Ohio Gun Owners opposes ANY state-level expansion of the Federal gun owner database (NICS or NCIC).

Expanding the NICS database has been a priority for well-known gun-grabbers like Dianne Feinstein and Chuck Schumer for several decades.

The reason why is because the NICS or NCIC database is a database of gun owners, plain and simple.

But that isn’t how Big Gun Control phrases it.

Conceived in a back-room deal in the 1990’s, the background check system was sold to the American public as a way punish criminals for trying to obtain guns.

The actual numbers, however, don’t pass the sniff test.

As of 2017, there have been over 1.4 MILLION denials issued by the NICS system, and here’s who it targeted:

176,000 denials were issued to fugitives from justice.

133,967 denials were issued to those convicted of domestic violence.

But it begs the question: if trying to obtain a firearm is a crime and stopping criminals from getting firearms is the goal, how many of these criminals get prosecuted?

During the Obama/Holder administration between 2008 and 2015, fewer than 32 denial cases nationwide per year were even considered for prosecution, let alone prosecuted!

In other words, criminals don’t hesitate to at least try to use legal methods to buy firearms because they know they’ll never face prosecution.

The media and gun-grabbers like Kasich gloss right over this inconvenient truth.

Instead, they point to Dylan Roof (the Charleston, SC church shooter) and Devin Kelly (the Sutherland Springs, TX church shooter) as examples of why this gun owner database needs to be expanded.

Devin Kelly obtained his firearm legally after the Air Force didn’t update their records into the NICS database.

So if we can just background check criminals HARDER, they say, we’ll stop them from getting guns!

But the statistical fact of the matter is, with over 100,000 NICS denials every year, had both Roof or Kelly been included in the database, NEITHER would have ever been prosecuted for their crimes.

And because neither of them would’ve been prosecuted, they both would have been free to obtain their guns as most criminals do – outside the law.

Keep in mind that the gun-owner database expansion that Kasich is proposing is already on the books in states like Maryland, Illinois and California.

Illinois already has expanded background checks, and how well has that worked out for Chicago?

But the fact is, they were never designed to.

Instead, they are a simple way to track, trace and register gun owners all across America.

➤➤ Every time a form 4473 is filled out, it creates a log that points directly to the buyer of the firearm.

➤➤ FFL firearms dealers are required to keep a log book of every 4473 transaction, and are required to provide that log to the Bureau of Alcohol, Tobacco and Firearms (BATF) upon request.

➤➤ When an FFL goes out of business, that log book is required to be sent to the BATF.

Additionally, the BATF now has an E-4473 that allows firearms sellers to electronically submit their form 4473.

➤➤ The worst-kept secret in the BATF is that they enter all of these logs into the national “suspect guns” database, effectively databasing gun owners at will.

And everybody knows it.

In 2013 after the Sandy Hook massacre, the state of Connecticut passed a firearms registration law that required gun owners to register their “assault weapons” like AR15’s by January 1, 2014.

Keep in mind that these were legal firearms that people had already passed background checks to purchase!

When the deadline expired, it was evident that roughly 300,000 firearms purchasers had in fact NOT complied with the mandate to register their firearms.

Gun-grabbers made an estimation that at least a portion of those 300,000 purchases were AR15’s, and that the owners were violating the new registration law.

So they went to their pals in the media, and the Hartford, CT Courant openly called on the state police to use the background check database (form 4473 data) to go house-to-house either confiscating the firearms or prosecuting the owners for the felony offense of not registering!

You see, Big Gun Control could care less about stopping violent criminals – they THRIVE on using murder sprees to advance their agenda.

Instead, expanding the background check database is mission critical for Big Gun Control because they can use it to categorically strip people of their 2nd Amendment rights with no due process.

Gun Owners of America has already tracked over 260,000 veterans who have had their names added to the NICS system, categorically stripping them of their gun rights!

No convictions. No court hearings. No due process.

And that’s why I hope you’ll take action IMMEDIATELY to help us Stop, Block and KILL SB288!

Your calls, emails, Facebook messages and Tweets against HB585 are getting louder by the minute!

But Senators John Eklund and Stephanie Kunzie have taken up Kasich’s crusade in the Senate by introducing SB288, and gun owners have to respond – NOW.

So please take a moment to contact your State Senator and demand they publicly oppose, block in committee and vote NO on Senate Bill 288 at every turn!

Governor Kasich is lame duck, meaning he can’t run for reelection as Governor.

Like a petulant child throwing a temper tantrum, he’s trying desperately to prove his bona fides to the gun-control crowd to build up his future presidential campaign.

And that’s the choke point.

If Kasich is going to succeed at passing his gun-control bills, he has to go through our legislature.

And our legislature doesn’t answer to Kasich – they answer to us, the gun-owning voters of Ohio!

So please take a moment right now to contact your state senator and demand they oppose SB288!

Just fill in your information (if you haven’t already), click which message you want to send and press submit!

If you choose to call your Senator’s office, we’ve prepared a calling script for your convenience.

We’re putting the pressure on legislators in targeted districts all across Ohio right now to Stop, Block and KILL both HB585 and SB288.

The more resources we have the better job we can do.

But please take a moment to contact your State Senator and demand they OPPOSE SB288, as that’s most important!

Governor Kasich is playing right into Big Gun Control’s hands, and his pals in the Ohio Senate are marching right along with him.

Please take a moment to contact your State Senator and demand they oppose, block in committee and vote NO on SB288!

And when you’re finished, please consider making a contribution to Ohio Gun Owners!

We’re pouring the pressure on the politicians in strategic districts, and the more resources we have the more gun owners’ voices will THUNDER at the Statehouse!

But whatever you do, please contact your Senator and tell them to vote NO on SB288, as that’s most important.

Free Glock 19 if you can get DeWine to sign the OGO Survey!