The momentum for a massive expansion of gun rights for Ohio in 2017 is building.

The shockwave from the November elections ripped through state legislatures across the country and anti-gun majorities were annihilated by gun owners furious for years of attacks against their Rights.

Hillary Clinton’s flaming pantsuit tails are illuminating the possibilities as states nationwide ready for the biggest expansion of gun rights in the modern era!

After years of trying to advance this critical legislation, the national surge for Constitutional Carry is ALREADY making waves at the Statehouse.

But the momentum for Constitutional Carry isn’t just happening in Ohio!

In fact, our friends at the Missouri Firearms Coalition jumped the gun back in September and crammed BOTH Constitutional Carry AND Stand-Your-Ground into law after overriding the anti-gun governor’s veto.

Our friends over at Iowa Gun Owners have worked tirelessly with pro-gun champions like Senator Rick Bertrand to pass Constitutional Carry and Stand-Your-Ground through their legislature.

After a strategic election program resulted in gun owners booting the anti-gun majority out of their state senate, they’re poised to ram Constitutional Carry and Stand-Your-Ground through all the way to the governor’s desk!

Gun owners in Wisconsin are ecstatic that State Representative Jesse Kremer is about to roll out an identical Constitutional Carry bill for the Badger State.

Down south in Georgia, the boys at Georgia Gun Owners are gearing up for a game of Constitutional-Carry-fiddle with anti-gun Governor Nathan Deal after gun owners worked tirelessly to boot out bad actors in their primaries.

In Minnesota, pro-gun Representative-Elect Cal Bahr is doing the same thing, introducing Constitutional Carry for Minnesota Gun Rights as they look to capitalize on pro-gun majorities!

I could go on and on!

Gun owners and their elected representatives in legislative bodies across the country are recognizing that peaceful gun owners don’t need a “permission slip” to carry a defensive firearm!

That’s why it’s time we add Ohio to the list of Constitutional Carry states!

And that’s also why I’m asking you to click on the image below and add your name to the statewide petition for passing Constitutional Carry in Ohio! 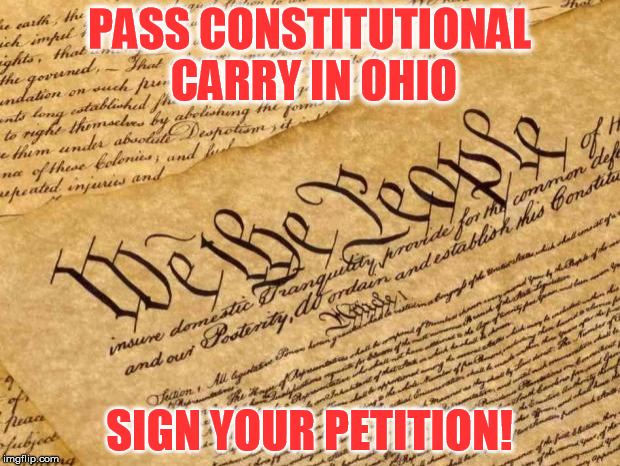 It’s high-time the politicians in Columbus stop acting like Cincinnati, Cleveland and Columbus get to drive the agenda for the rest of the state.

It’s high-time that the pro-gun majorities in the General Assembly do the jobs they were sent there to do and PASS Constitutional Carry!

So please click and submit your petition for Constitutional Carry right away!

This isn’t going to be an easy push.

In fact, getting politicians to do anything substantial when it comes to our Right to Keep and Bear Arms never is.

So after you’re done submitting your petition, won’t you forward this email on to your friends and ask them to do the same?

It’s going to take tens of thousands of Ohioans from across the state to get this bill passed, so if you’ve got any pro-gun friends you think would add their names, please take a moment right now and ask them to sign it, too!

Thank you for everything you do to fight to defend and advance our Second Amendment Rights!

P.S. After the pro-gun landslide elections we saw on Nov 8th, the momentum for massive pro-gun expansions like Constitutional Carry is skyrocketing nationwide and right here in Ohio!

Get involved in our fight by signing your petition in support of Constitutional Carry!

And when you’re done, please forward this email to all your pro-gun friends and family so that they can get involved as well!

To stay up-to-the-minute on the fight for gun rights in Ohio, please take a moment to follow us on Facebook and Twitter by clicking the images below!