In the wake of today’s assassination attempt in Washington DC (Alexandria), gun-control advocates like Virginia Gov. Terry McAuliffe are already trotting out their predictable demands for more gun control.

Never mind the fact that today’s shooter had already passed a background check in his home state of Illinois — proving just how worthless those checks are in the first place.

And never mind the fact that study after study shows how violent crime always decreases when gun rights are expanded.

Instead, before the blood of the victims is even dry, gun-control advocates are already trying to seize the momentum. 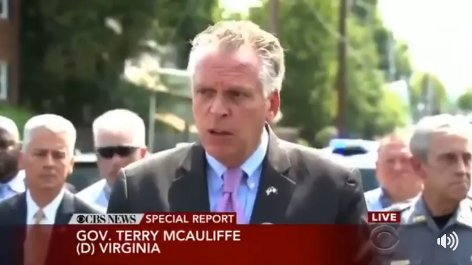 I don’t know about you, but I am sick and tired of gun-control advocates using the results of their own failed policies as ammunition to try to implement even more gun control!

Of course, you’ll hear almost nothing in the media about the fact that the shooter was a volunteer on the Bernie Sanders campaign in Iowa last year.

And you’re not going to hear that the shooter was a member of an organization called “Terminate the Republican Party.”

And don’t be surprised if you don’t see national media outlets telling you that the shooter — before launching his attack — confirmed with witnesses that the baseball stadium he was entering was where the Republicans were practicing.

Nor will you see these anti-gun politicians condemning members of their own party for producing satirical videos of the president being beheaded or calling on their supporters to “fight in the streets.”

Gun-control activists in this country are brazen and bold in their attempts to crack down on our right to keep and bear arms — and they are unwilling to compromise.

But we need your help.

Now, with the call for gun control being sounded so loudly, I hope you’ll stand up and fight for the Second Amendment here in Ohio!

Please get involved with our organization by becoming a member TODAY!

Whether you can join as a lifetime member as some generous supporters have done or whether a basic membership is more appropriate to you at this time — please get involved in this fight!

I can assure you that anti-gun activists in Columbus aren’t going away anytime soon.

And if you and I want to follow suit with other states in passing major pro-gun reforms, I hope you will send a loud message that you aren’t going away anytime soon either, by joining Ohio Gun Owners!

Whatever you do, please take a moment to pray for all the victims and their families who are recovering from this act of political violence.

P.S. In the wake of this morning’s political assassination attempt in Washington DC, gun-control advocates are calling for even more gun control as you’ll see in the video above.

That’s right, before the blood of the victims is even dry, anti-gunners are trying to mobilize.

And it’s no different here in Ohio!

Please support the Second Amendment and stand up against these unhinged gun control activists by joining Ohio Gun Owners TODAY!

To stay up-to-the-minute on the fight for gun rights in Ohio, please take a moment to follow us on Facebook and Twitter by clicking the images below!