This afternoon, Governor Mike DeWine signed House Bill 86 into law in his ceremonial office at the Ohio Statehouse!

His signature comes as the culmination of the hard work of the thousands of gun owners like you across Ohio who took action and contacted your state representative, state senator and the Governor’s office! 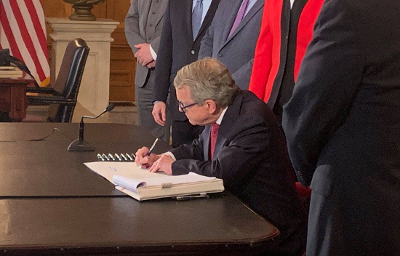 The credit for the speed at which our General Assembly passed this fix into law is due to one entity only – the thousands of members of Ohio Gun Owners!

➜ Thousands more took the time to pick up their phone and call their elected representatives, with additional gun owners even Tweeting their legislators and demanding action!

That’s what Ohio Gun Owners is all about.

We exist to serve one entity, and one entity only: our members and supporters.

Ohio Gun Owners is a grassroots mobilization organization and we work hard to equip our grassroots membership like you with the tools you need to effectively fight for gun rights on your own behalf!

Today, that organizational approach paid big dividends, and we have every confidence it will continue to pay dividends for our future.

OGO rejects the idea we need a slick lobbyist going around on bended knee begging for our gun rights.

And we reject the idea we need to cut backroom deals or water down our own legislation in order to appease anti-gun special interest groups!

Equipping and mobilizing gun owners by the tens of thousands to lobby for themselves is a proven, steady approach that we’re excited to build upon.

As we get ready to build on our momentum for the rest of the 133rd General Assembly, we look forward to passing fabulous bills like Stand-Your-Ground and Constitutional Carry!

And as you have already seen, the more people we have involved in this fight the more successful you and I will be.

So if you’re not already a member of Ohio Gun Owners, please become one today!

If you are already a member and you want to help increase the size of the army of gun owners fighting with us, please consider an additional contribution to help that effort.

Thank you so much for standing with us in this fight!

Not a member? Join HERE.
Already a member? Contribute HERE.

Ohio Gun Owners is organized as a 501(c)(4) organization under IRS code and contributions are not deductible for income tax purposes.