“This is crazy! I never thought I’d live to see so many people in Ohio fighting to destroy the Second Amendment. I need to become a member now!”

That’s what Stephen C from Westerville told us over the phone last night as many of you have contacted us about the massive gun control protests going on in Columbus — and across the nation — this weekend. 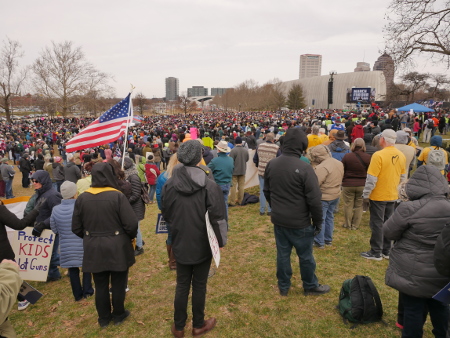 Simply put, many Ohioans are just now awaking to the harsh reality that anti-gun activists are mobilized and having an impact here in Ohio.

Of course, their goals are not to pass some peripheral gun control.

From banning Glock 19’s and Ruger 10/22’s, to passing magazine capacity restrictions to passing Bloomberg’s statewide fireams registry — they want it all.

If you didn’t see our footage from the gun-grabbers event in Columbus, check it out here.

(Their intolerance and outright hate of our right to own defensive firearms was on complete display – we were even SPIT ON multiple times!)

And, what’s more, they are being bankrolled by Michael Bloomberg, the NYC billionaire who is surround by 24/7 armed security.

But much worse that his funding of this one-day public relations stunt, is what he’s doing in the halls of the General Assembly in Columbus.

Ever since the Florida murder rampage, our legislature has felt the force of gun control activists who have been crawling through the Statehouse to try to hammer gun control bills into law.

We’ve told you previously about Senate Bill 260, which would ban most pistols, rifles and even a lot of shotguns.

We’ve told you about the gun-control omnibus bill that Governor Kasich is preparing, and the near-daily introduction of myriad of gun-control proposals by Bloomberg’s militants at the Statehouse.

With the primaries right around the corner and the all-important 2018 midterms rapidly approaching, I hope you’ll get involved in this fight immediately by contributing to OGO.

I don’t know what you can afford, I just hope that you’ll be as generous as you can!

As gun owners, we know that the rights that we have are due in large part because of the generations of gun owners that went before us and fought to secure our freedoms.

Our children and grandchildren are trusting in you and me, right now, to make sure that we defend their rights, too!

If gun-grabbers ever get the votes to do it, they will strip us of our gun rights without a moment’s hesitation.

That’s why we can never let up.

Ohio Gun Owners won’t let up, we won’t give an inch, and we won’t back down.

Please stand with us now!

P.S. Being whipped into a frenzy by the liberal media and funded by Michael Bloomberg’s war-chest, thousands of people marched in Columbus this weekend demanding gun-control, several even SPITTING on the OGO team as we peacefully documented their rally.

As we saw yesterday, the radicals from Bloomberg’s brigade aren’t going to compromise, aren’t going to let up, and they’re committed to crushing our gun right in the Statehouse, too.

That’s why you simply must stand with us right now!

Ohio Gun Owners is working around the clock to identify, organize and mobilize a grassroots ARMY of gun owners like you from around our state to FIGHT BACK!

Please stand with us and make a special contribution to help us maintain the fight in Columbus right away!